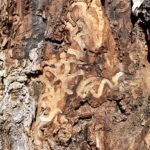 The emerald ash borer is slowly making its way into Western Kentucky after spending the past decade largely in the eastern half of the state. The tiny, dark-green metallic beetle was first found in Central Kentucky in 2009. Due to the “Slow the Spread” campaign and quarantines that encouraged Kentuckians not to move firewood, the bugs’ westward movement was greatly slowed.  However, it has been recently found as far west as Crittenden County.

“Western Kentuckians need to know if they have an ash tree. If they do, they need to start preparing to make some hard decisions,” said Jonathan Larson, entomologist with the University of Kentucky College of Agriculture, Food and Environment. “Those decisions are whether to remove the tree now and pay that money up front or to invest some money and treat the tree to keep it around.”

Over the years, ash has been a popular tree for Kentuckians to plant. It is commonly found in neighborhoods, backyards, and woodlands across the state.

The emerald ash borer attacks all species of ash. Adult borers feed on a tree’s leaves. The larvae burrow into the tree to feed on the bark, destroying the tree’s ability to transport water and nutrients to its canopy. This can cause loss of the entire canopy within a year or two.

Susan Fox is Lyon County’s agriculture and natural resource extension agent. With the emerald ash borer only a county away, she is encouraging her clients to be aware of their ash trees, the insect and its effects.

“I want people in my county to start watching for symptoms of the emerald ash borer,” Fox said. “As the insect pressure grows, they will have to make some decisions about their trees. If they have a lot of ash in their woodlands, they may want to log it now. Once the borer is found in a tree, it loses all value.”

Early symptoms of the emerald ash borer appear as leaf dieback and leaf drop in the top one-third of the tree. An increase in woodpeckers visiting the tree is also a tell-tale sign of an infestation since the birds love to eat emerald ash borers. Trees with an advanced infestation will have D-shaped exit holes and splitting bark from adults emerging from the tree.

“Western Kentuckians may begin noticing leaf dieback in the top third of the tree canopy,” Larson said. “You can treat and save a tree if it still has at least 50% of its canopy.”

“Ash trees have diamond-shaped patterns in the bark that look kind of like alligator skin and nice, compound leaves on the plant,” Larson said.

If landowners decide to remove the ash and replace it, the UK Department of Horticulture offers an educational publication to help people decide on the replacement tree that would work best in their environment and personal preference. The publication ID-241: After Your Ash Has Died-Making an Informed Decision on What to Replant is available at http://www2.ca.uky.edu/agcomm/pubs/ID/ID241/ID241.pdf or local extension offices.

UK Cooperative Extension Service agents can help landowners determine if they have an ash tree and if their trees are showing early symptoms of the emerald ash borer.